How Has French Influenced the English Language? 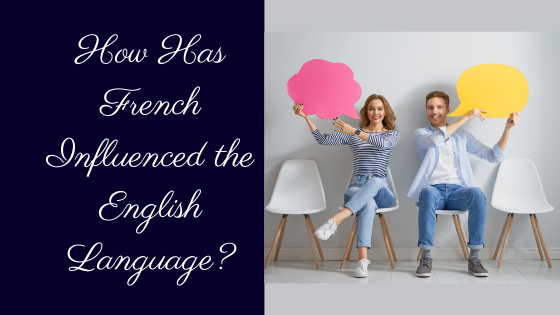 Let’s look into whether the French language influenced English and what it means for you as a learner.

When you first start learning French, you may think that it is a very different language to English. But as you start to explore, you come across some familiar words – déjà vu! But why the similarity?

The truth is, just like the languages, the countries of France and England have some shared history.

The most notable historic event was of course the Norman invasion of England in 1066. William the Conqueror became king and made French the new court language. It stayed this way for around 300 years.

Aside from royalty and nobles speaking French for centuries, the language also trickled its way down to the common people, too.

They stopped speaking what we call Old English and started speaking Middle English. This newer version of English was a combination of the already known Old English, and the newly introduced French language.

“When the sweet showers of April have pierced
The drought of March, and pierced it to the root
And every vein is bathed in that moisture
Whose quickening force will engender the flower…”

Are any French words still used in English?

English adopted nearly 10,000 words from the French language, about ¾ of which are still in use today!

These new words are predominantly related to government, law, art, literature and food, though there are others as well. Some words remain the same (at least in spelling!) in both languages, while others simply have French origins.

Here are some examples of words that have the same,
or very similar, spelling in both languages:

Do you see some familiar words in this list?

The wonderful thing about these languages sharing vocabulary is that it can make studying that little bit simpler.

You can recognise a word and already understand, or at least guess, it’s meaning.

This makes improving your vocab a breeze!

Now for the tricky part.

Despite having similar spellings, many of these words have different pronunciations!

This just means a little extra practice to overcome that foreign accent when using these words. Don’t feel badly if you get it wrong at first, just keep trying!

To get you started, here are these words again with their French pronunciation:

Ambulance
Notice the nasal ‘an’ and ‘am’ sounds.

Débacle
In French, this word has a softer ending than the English version.

Restaurant
Be mindful of that silent final T and the French R sound (twice in this word)!

LISTEN to how to pronounce these French/English cognates here.

Do you know of any other French words in English?

French has a long and interesting shared history with the English language. You may encounter French many times each day without even realising it!

Challenge yourself to Spot the French Words next time you are out-and-about.

PS: If French sounds give you nightmares and you’re sure you won’t be understood when you speak French, contact us to book a lesson or two with a French Speak teacher who can help you work on the parts you find tricky and teach you the mechanics to say it just right and be understood every single time.