How to better memorise the French you learn 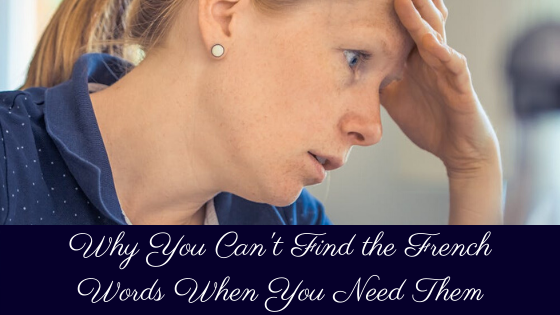 Not using spaced repetition practice is the reason why you can’t find the French words you learned when you need them.

Many adult learners will complain that they have a bad memory, saying this is the reason they are unable to learn a new language. Some lament that it was so much easier for them to learn French when they were younger.

A learner struggling to memorise the French she learned recently said to me:

“How can I make what I learnt in class stick better? It seems like as I’m getting older, my memory is failing me. Maybe I shouldn’t even be trying to learn French…”

I was a bit heartbroken by this question.

You are never too old to learn French!

I have students of all ages come to study with me, that all do a fantastic job.

Some even learned it in high school for years with 3-4 hours of French weekly and within half the time, they can do more in French than ever.

I’ll tell you what I tell them when they need help to memorise the French words they learn:

The first thing to realise is that learning and memorising are two very different processes. Both are equally important steps in learning French as a foreign language.

There are three key steps to learning French. You must:

Revising is an essential part of the language learning process.

You can learn what a word means, how to pronounce it and even use it in sentences. But to truly speak fluently in the language, you must be able to memorise that word and its meaning to use it appropriately in context.

Otherwise when you start speaking or writing, you’ll quickly notice that the French you thought was in your brain somewhere has now vanished.

There is a very simple reason for that.

You need to train your brain to understand that the information you’re learning is something you really do want to keep in your long-term memory. Recall is the best way to do this.

If you are constantly learning new things – new words, phrases and sentences – your brain prioritises some information over others. During that lesson, you may understand some, most or all of what your teacher has explained.

But without practice, you’ll lose those new skills.

Research shows that there is a phenomenon called the ‘Ebbinghaus Forgetting Curve’ and it looks like this: 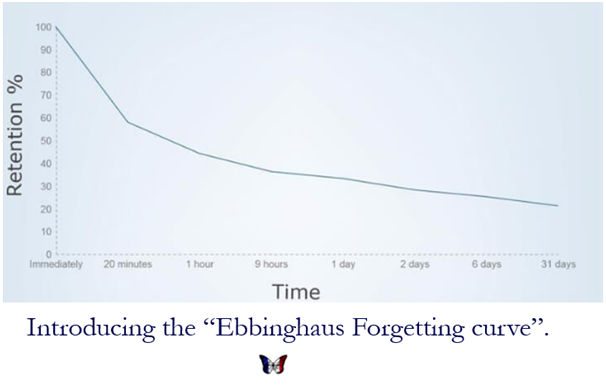 After just one month, you forget 80% of what you learned. Scary, n’est-ce pas?

That’s why I want to talk to you about spaced repetition.

Put simply this is a specific formula designed to move the French you’ve learned into your long-term memory.

Spaced repetition practice means that when you learn something new, you revise it often. As you get better at recalling that information, you create longer gaps between revising or practicing it.

This tests your brain’s long-term recall function for that particular word, phrase or sentence. 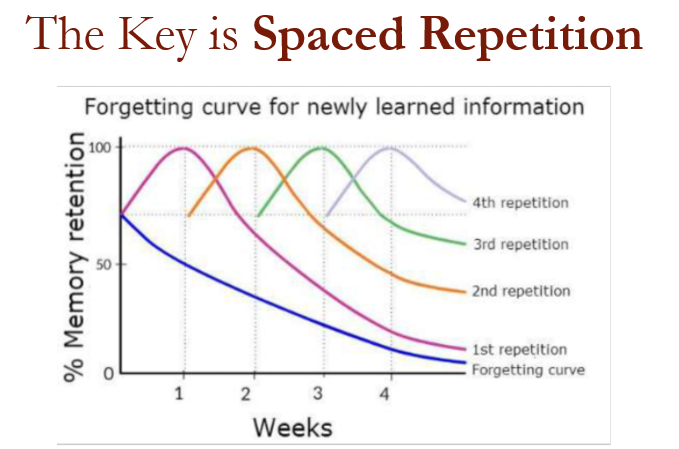 Next time you learn something, you need to plan to repeat, review and recall it at least five times:

If you find you cannot recall the word, phrase or sentence, it’s not yet in your long-term memory. Study it daily until you feel confident, then wait 2-3 days and review again.

Repeat this process for any new French that you’re struggling with, and you’ll soon be memorising way more than you ever thought possible!

Taking the time to do these repetitions instead of learning more new things truly is the key to memorising them.

Once you’ve memorised them, the next time you try to use that word in conversation it will be so much easier to recall!

Will you be including Spaced Repetition in your practice from now on?

In all our teachings, we build in regular reviews to ensure you remember what you learned. You can take a look here.